Upper Nisbet is a 636.25 hectare farm which is part of Lothian Estates in the Scottish Borders.  The Neill family took over the tenancy at Upper Nisbet in May 2000.

The farm currently has 320 suckler cows. This number has been increased gradually year on year since arriving at Upper Nisbet with 200 cows in May 2000. The majority of the cows are Limousin cross British Friesian but some British Blue breeding has been introduced into the herd and the recent purchase of an Aberdeen Angus bull will be used to breed replacement heifers. The main supply of replacement heifers are sourced from the family dairy farm. The replacement Friesian heifers are put to the Limousin bull to produce the first crosses for the suckler herd. There is a small herd of pedigree Limousin cows which are used to breed bulls to be used on the suckler herd.

All of the straw from the cereal crops is baled and retained on the farm for feeding and bedding which is then spread on the arable ground as farmyard manure to enchance the soil quality and texture.

The beef and arable enterprises complement each other and each provides a benefit to the other sector. The suckler herd are providing a plentiful supply of farmyard manure to improve the nutrient value of the soil and the arable crops provide not only feeding but also bedding in order to reduce our input costs. 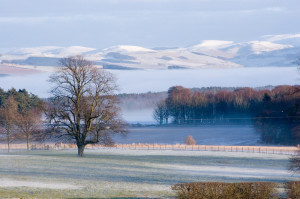