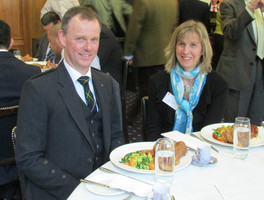 On Tuesday 26th March, 2013, Robert and Jac Neill were invited to attend a Butchery Masterclass and luncheon in Butchers' Hall, London, in the presence of HRH The Princess Royal, president of the Scotch Beef Club, organised by Quality Meat Scotland.

The overall aim of the event was to reinforce the essential elements that make Scotch Beef different and to encourage chefs to think more about the meat products that they use. To emphasise the importance of each link in the supply chain, in particular that of the farmer, the primary processor and the butcher.  Their skills and care and attention are absolutely necessary to provide the chef with consistenly great beef.  Scotch Beef is accepted as expensive, but by using innovative butchery techniques to make the most of every single cut that comes from a carcase and creative culinary techniques it is very versatile and need not be out of reach.

Robert and Jac had an opportunity to discuss with HRH The Princess Royal how they operate the 300 cow beef enterprise in the Scottish Borders to provide consistently high quality beef to local butchers and restaurants.

After a lunch of Upper Nisbet roast beef the chefs had an opportunity to try their hand at the techniques demonstrated by Viv Harvey during the morning session.  Jac also joined in and worked on a feather blade cut which is traditionally a poorer quality of beef that is often braised.

Jac and Robert then packaged up the beef to bring home for their supper the following night, and a delicious treat it was enjoyed by Andrew and Harry Neill. 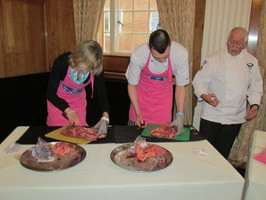 Scotch Beef Farm of the Year winner announced at AgriScot 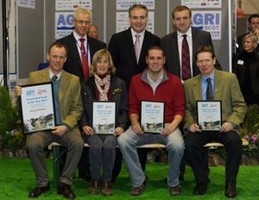 The winner of the first ever Scotch Beef Farm of the Year Award was unveiled today (Wednesday 21stNovember) at AgriScot by Rural Affairs Secretary Richard Lochhead.

Upper Nisbet Farm, near Jedburgh, run by Robert and Jacqueline Neill, was described as “ticking every box” during the presentation to announce the overall winner of the award, launched by AgriScot and Quality Meat Scotland in July this year.

The other two finalist farms who were also visited by the judges earlier this month were Perthshire-based Netherton Farm near Auchterarder, run by the McLaren family and  East Lothian-based Cairndinnis Farm, near Haddington, run by Euan Smith.

Brian Turner, who has worked in top restaurants including Claridge’s, Simpson’s in the Strand and the Savoy Grill, joined judges Jim McLaren, Jim Brown and coordinator John Elliot, during the finalist farm visits. He described all three finalists as “dedicated, focused and experts in their field.”

During a presentation ceremony in the main ring at AgriScot Cabinet Secretary Richard Lochhead congratulated the three finalists.

“Scotland has a long-established and richly deserved reputation for excellence in breeding and finishing quality beef cattle,” said Mr Lochhead.

“I am pleased that the first Scotch Beef Farm of the Year award has attracted a high calibre of entrants from different types of beef enterprises across Scotland.

“Clearly the judges did not have an easy task and my thanks to AgriScot and Quality Meat Scotland for providing this platform to ensure the best of the best are recognised for their outstanding stockmanship. Their skills play a vital part in ensuring the continued success of the Scotch Beef brand - an iconic symbol of quality throughout the world.”

The Neills received a £500 cheque as well as a £250 voucher to celebrate their success at a Scotch Beef Club restaurant – the club run by QMS which has around 300 members committed to serving top quality Scotch Beef.

Andrew Moir, AgriScot Chairman said: “It is important that AgriScot showcases the very best of Scottish beef production and this new award fits well with the ethos of AgriScot as the leading business event.”

Jim McLaren, Chairman of Quality Meat Scotland said the judges had been impressed by the commitment and passion shown by all three finalists. “It was a pleasure for us to visit the farms and meet beef farmers who showed such energy, enthusiasm and focus. Their commitment to producing top quality Scotch Beef augers well for the future of our industry.”

During the visit to the three farms the assessors were looking for evidence of a high standard of technical and financial performance, uptake of new ideas to improve efficiency/profitability, a high level of health and welfare and a keen eye on the market for the end product. The assessors were also looking for evidence of the passion and enthusiasm by the farmer, and family and staff where relevant, to efficiently produce high quality animals.

All farms producing cattle destined to be used for meat sold under the Scotch Beef label – from breeders through to finishers - were eligible to apply for the new award and accordingly they were also required to be members of Quality Meat Scotland’s farm assurance scheme.